“Fimber Bravo and young Senegalese kora player Kadialy Kouyate found a common thread, and proceeded to weave it into a tapestry of multi-hued beauty..It really worked those two instruments (the steel pan and kora) coming together.”
Andy Kershaw BBC Radio 3 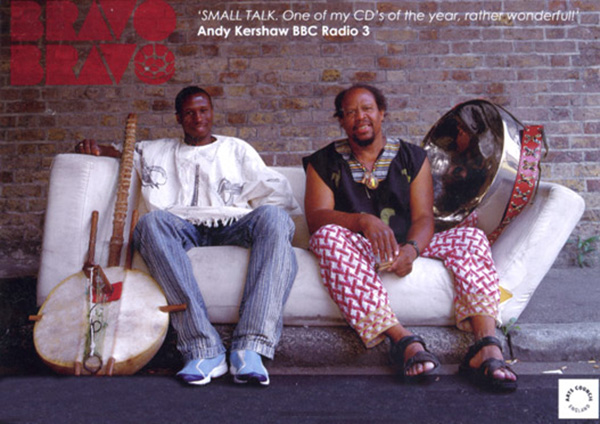 Since leaving Trinidad, Bravo has recorded steel pan on albums with artists as diverse as Winifred Atwell and Morcheeba. With the prestigious Pan Am North Stars he has played at world venues like Carnegie Hall. As a founder member of Twentieth Century Steel Band he recorded two albums as lead pan with United Artists including the cult classic track Heaven and Hell on the seminal album Cold Steel, Warm Heart.

He has recently recorded the steel pan featured on Hot Chip’s acclaimed album “One Night Stand” and on their War Child cover of Joy Division’s Transmission, performing with them earlier this year at Brixton Academy. He has also released with Zongamin – Street Liming and is working on an EP with Susumi at the moment. He is currently mixing tracks with Johnny Wilkes from Optimo for his new CD, Confusion, guest artists playing on it include Alexis Taylor, Susumu Mukai and Claude Depper.
A Musical Director
He became musical director of Steel n’ Skin, the first black group to be funded by the Arts Council of Great Britain. It was a catalyst for contemporary black arts groups throughout the UK.

As one of the most experienced black community musicians working in the UK, Bravo has carried out music workshops from the Royal Opera House to Wormwood Scrubs and helped established acclaimed black arts groups in Toxteth, St Paul’s, Bristol and Brixton.

Steel n’ Skin played to thousands in angry mourning through the streets of Deptford as they chanted ’13 Dead Nothing Said’ and alongside Hugh Masekela at solidarity Anti Apartheid gigs.

Founding Bravo-Bravo in 1990, Fimber Bravo produced the album Soca Picture. In 1993, he won the Trinidad and Tobago Foundation for the Arts Award for his contribution to steel pan and Caribbean music.

As a percussionist he has toured with Blur performing with them on ‘Later’ with Jools Holland. Paul Godfrey from Morcheeba was in the middle of recording their album ‘Fragments of Freedom’ when he first heard Bravo play. He rang his brother Ross Godfrey, ‘He was just amazing, I stood there listening for half an hour thinking ‘we got to get this guy on our records’.

On the other end of the phone Ross was equally excited: ‘he was playing this blues, totally different you know from steel pan stuff that I always associate with being strictly Caribbean. I said to Paul you’ve just got to get his number.’

Bravo recorded ‘A Well Deserved Break’ on the ‘Fragments’ album. Morcheeba ‘We were absolutely mesmerized by his sound – the pan is just the most beautiful instrument – if you can play it well, it’s just amazing!’